This post is the English translation of the one published on blog.groupe-sii.com to present a new kind of development activities in SII Group: the extension of the VMware vCloud Director portal.

The post will explain the concept that enables the extension of this VMware product to add new functionalities to the native portal and to provide a consistent user experience to final customers.

VMware vCloud Director is a quite common reference in virtualized infrastructures, especially for Service Providers (for mutualized cloud hosting) or major companies with sizable infrastructure.

Its concept is based on a simplified view, targeting VM users, to consume IaaS (Infrastructure-as-a-Service) resources with tenant or service-based restrictions.

Natively, vCloud Director (vCD) interface is an overlay of other VMware’s product as vCenter/vSphere, et NSX-V (for Software-Defined Networking) and its features are limited to the consumption of VM, storage and network resources (both L2 & L3).

Since the 9.1 version (2018, march), vCloud Director cames with an extensibility feature. This allows to the platform administrator to extend the features perimeter.

Indeed, through a dedicated development, it is possible to create the technical context to execute the automation linked to new features to add to the vCD portal (UI, API, backend, third party interconnect…).

Example : Provide to end-users a support-ticketing-interface integrated to the vCD portal.

The publication perimeter for a custom extension can be set according to the plateform needs and the extension. So it is possible to publish it for: 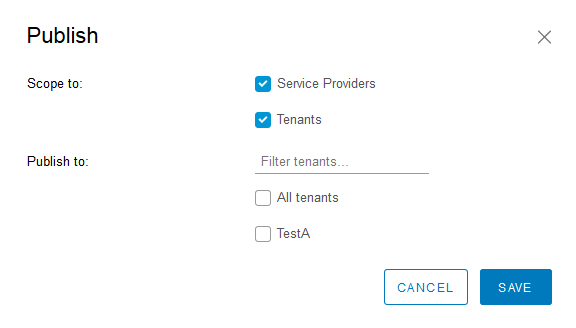 Probably the most obvious benefit of the extensibility feature of vCloud Director is the capacity to integrate in a single user interface (UI), new sections to give access to added features.

This includes the addition of a customized item in the main navigation menu: 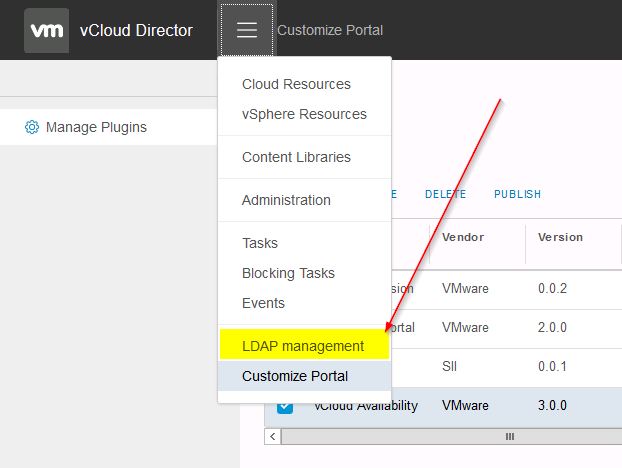 It also includes the ability to add custom pages to display the content of extension(s). As those pages are loaded inside the vCD UI, it is recommended to reuse style and components of the native interface to offer an unified user experience (UX).

As vCD uses the open-source Clarity framework, mainly developed by VMware, for the HTML5 interface, it is possible to reuse its components (Angular), styles and best practices.

A second possibility offer by the extensibility kit of vCloud Director is to extend the perimeter of URI allowed in the vCloud API. With this API extension, it is now possible to use a standard vCloud API path (https://<vcloudserver>/api/) to request information and actions for an extension.

Our coffee extension aims to provide a feature to create coffee machine order through vCD portal.

Requests sent to vCloud API at this path : https://<vcloudserver>/api/coffee/order and for instance, a POST request type (and its appropriate parameters) will start a new order to the coffee machine. A GET request will list the previous commands etc.

To handle the extension related customized requests, a backend server is necessary. This server can be hosted on a dedicated host (or the vCD server (cell) but not recommended) and can be written in any language of your choice (Python, Java, Node etc.). Messages received by vCD on the extension path (coffee) will be forwarded to an intermediate RabbitMQ server to be consumed by the extension backend. Once the request content is processed, response content is sent to the AMQP server and consumed by vCD to provide an answer. 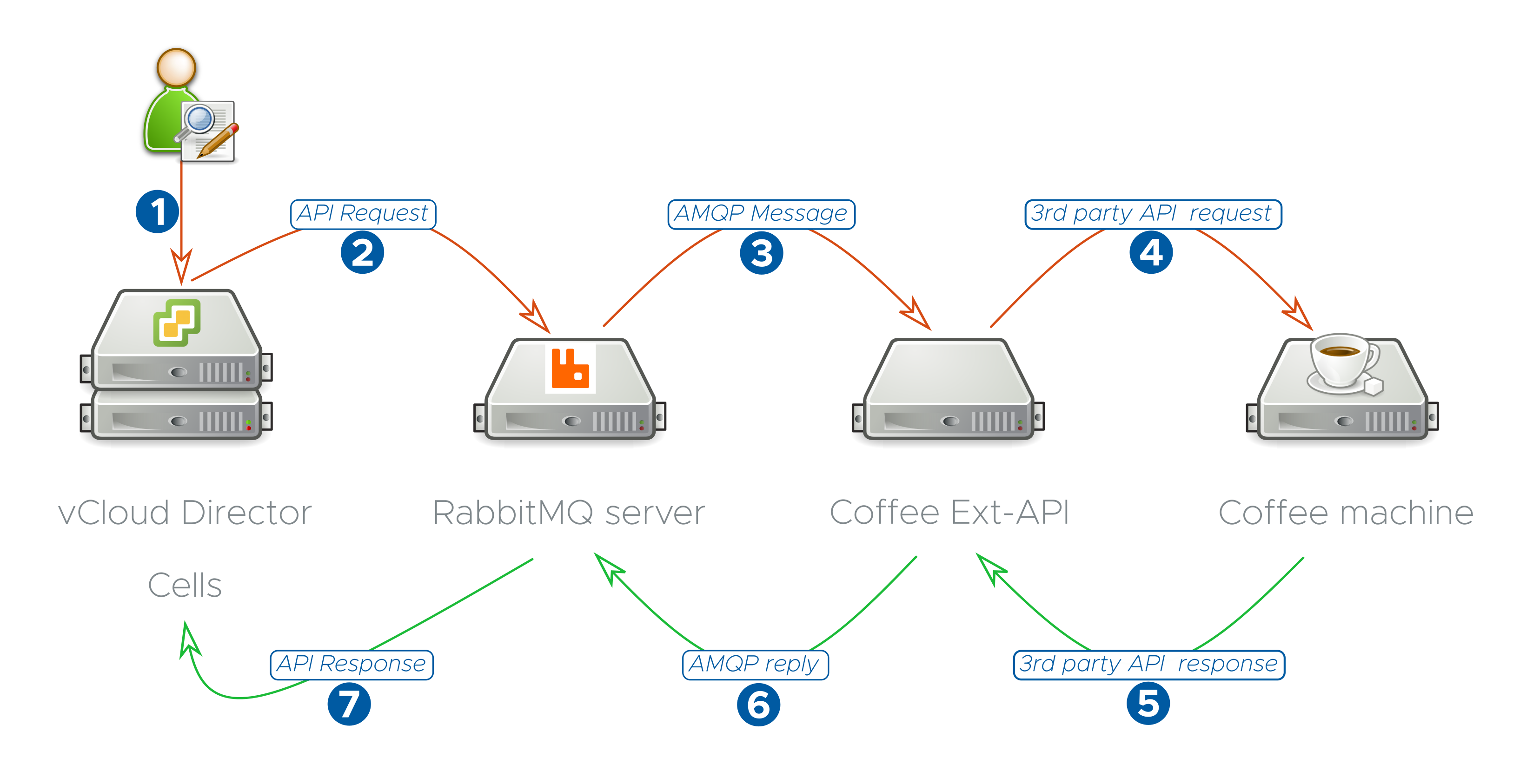 To help the development of vCD’s extensions, VMware provides a SDK that contains:

As the coffee machine is purely fictitious (even if it could be very useful ☺️), but the need for extensions in vCloud Director is not lacking.

At SII Group, we had chosen to develop an interface to manage LDAP based users trough the vCloud Director portal.

Natively, vCloud Director supports the authentication from both local and LDAP based users. Sadly, for LDAP based users, it is not possible to edit user’s information or to create new one from vCD. Only attachment to an organization is possible.

If you are a Service Provider hosting customers that do not want to manage their own LDAP server to create users for vCD access, but aim to use a single source of authentication for multiple usages (vCD, VM’s OS etc.): a mutualized LDAP server can be a useful service.

Once a user is created in the LDAP server, it is possible to associate it with an organization and a role to allow its connection to the vCD portal.

This extension API is based on a Python script lumext that initiates a new applicative thread for each request from the AMQP queue. In the benefits of using per-request Python thread, we can mention:

To consume and publish (consumer/publisher roles) messages with AMQP protocol, we use the Kombu Python package as it turns out to be very reliable and to provide easy support for thread usage.

Note : VMware’s examples use the Pika module for the same kind of usage.

In the case of LUMExt, VcdExtMessageWorker initiates a new thread of lumext worker for each request. This one is in charge of the request-analysis (is it a listing request or a user-creation one, user-edition ?). Once the request is processed, the answer is published to the reply-to queue of the RabbitMQ server and consumed by vCD.

REST API extension provides the following paths to the users:

Same API is available for both organization’s administrators to setup automation tools (to create users, for example) and for the UI that fully relies on this API to access data.

Finally, the usage of AMQP protocol, stateless threads and our MessageWorker based on Kombu allows to horizontally scale our extension backend to multiple nodes if necessary (to ensure high availability or load balancing).

The LUMExt user interface is fully integrated to the vCD portal and is based on the same UI components (Angular) and the same graphic charter (based on open-source Clarity framework from VMware).

The main navigation menu is supplemented with a new link to access to the LUMExt pages. 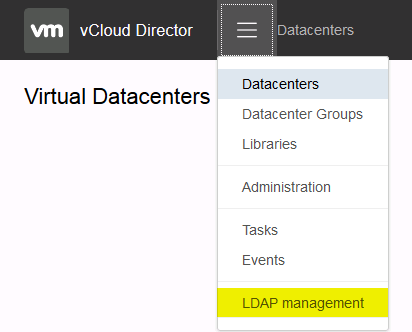 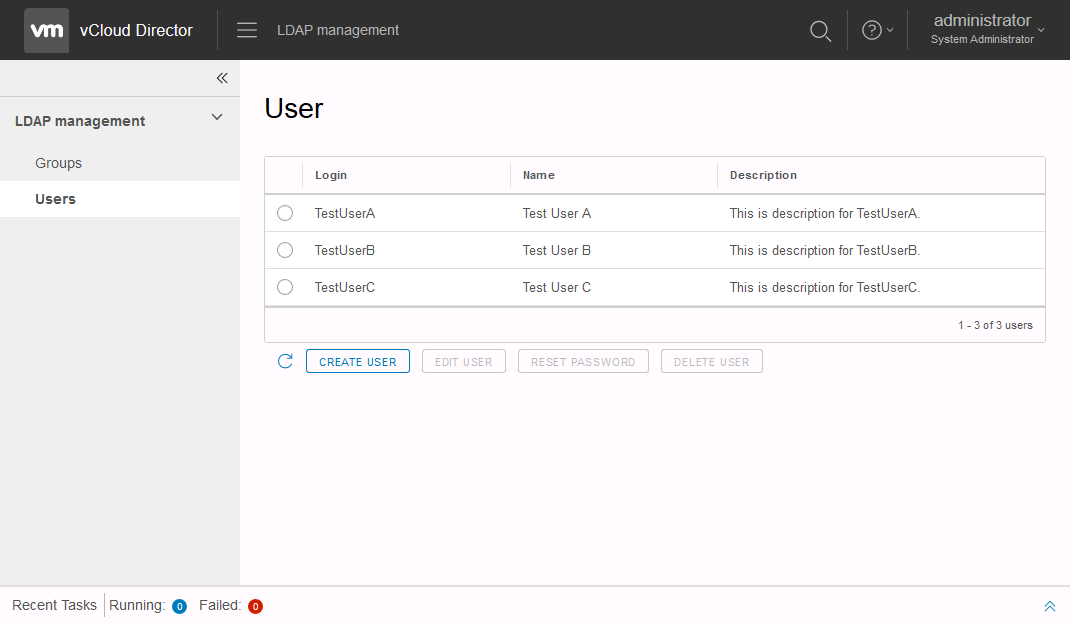 In the following screenshot, it is interesting to notice that only the middle part is developed for the extension. Navigation menu on top and tasks list on the bottom are vCD natives (and cannot be modified). 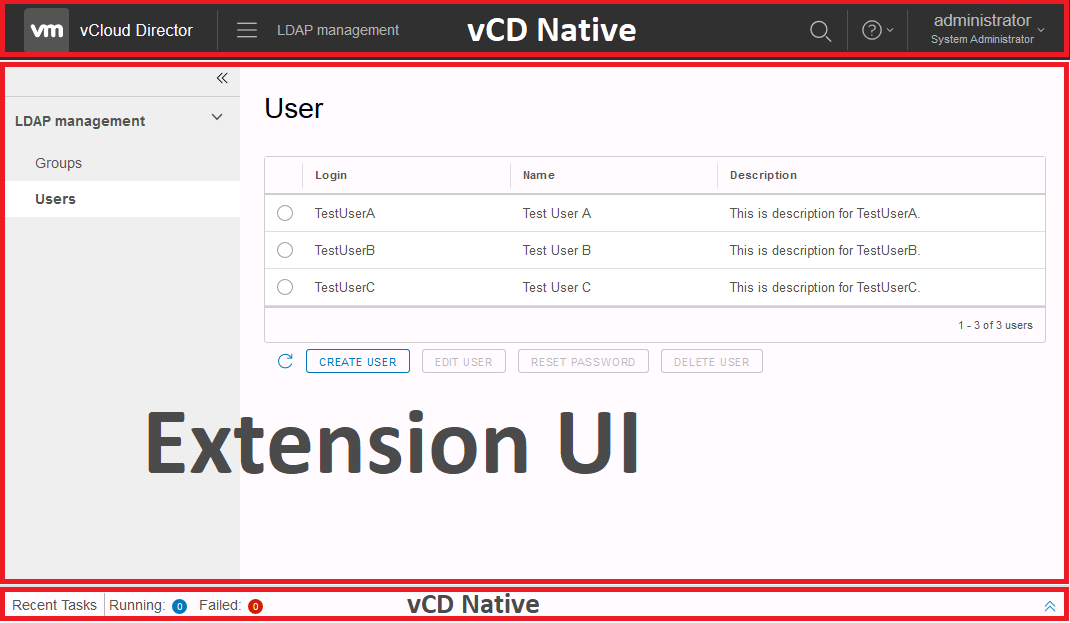 To create a new user, some form fields are requested:

The data are sent to the backend and store in the LDAP server in appropriate directory fields. 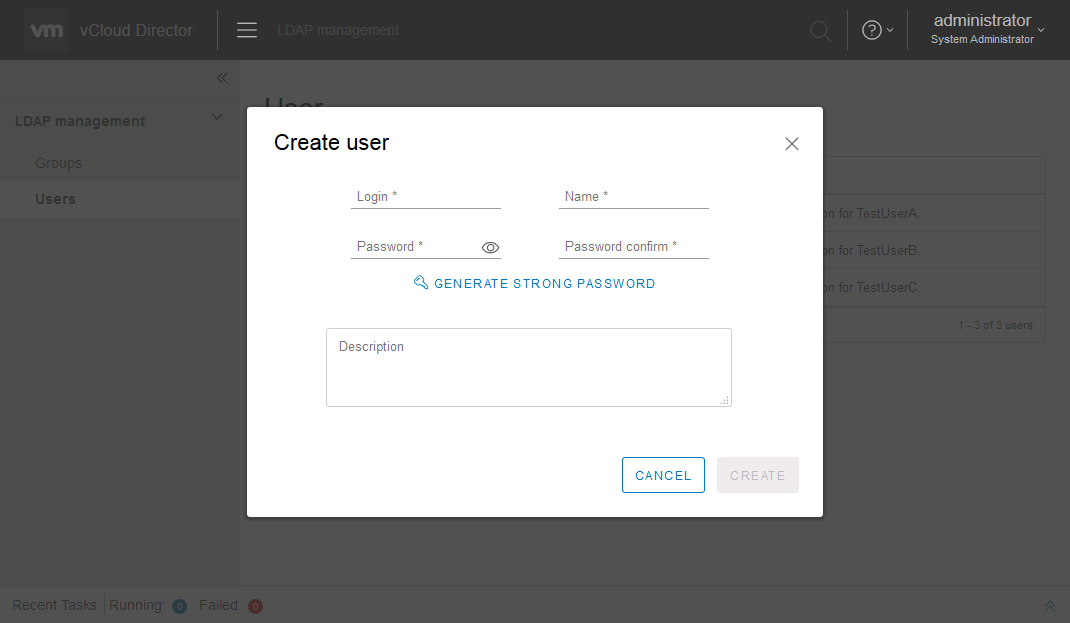 Note : LDAP based groups support is intended but not yet developed.

LUMExt is an internal SII project that we “opensource” (MIT license) on github to demonstrate the extensibility abilities of vCloud Director with a technical and complete use-case.

Since about 6 months, our teams have working on these kind of plugins development for our customers to extend the available features of the vCD portal with tools for their customers (as “Service Provider”).

It is also a great example of the combined work of developers and infrastrucure engineering in our teams, when, in computer science history, both jobs are more and more linked together.